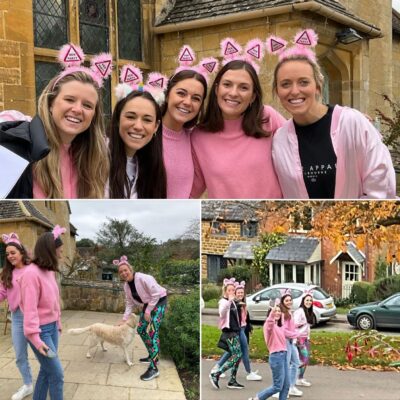 We help find lost keys and rehome stray sheep, we can set you on a footpath and generally act as informal tourist guides to the north Cotswolds. But it’s unusual to be asked to produce a set of twins. When the attendees of Olivia’s Hen Party visited the shop this weekend, they were brandishing a list of hilarious items to find on a treasure hunt. Left to right: Anna, Danni, Alice, Claudia and Rosie were gamely sporting fluffy ears and pink tops when they burst into the cafe on Saturday. “We hope you’re a hen party,” we said. They wondered if we could point them to the nearest spa, or in the direction of a “children’s slide.” The slide was an easy one. We described how to get to Ilmington’s famous playground and, flushed with this success, the girls produced a full wish list of Things to Find. Twins were a tall order, but of course we do have infant twins who attend our Parent and Baby group on a Wednesday. “Is there a dog in the village?” they asked innocently and we suggested that if they waited maybe 30 seconds on the terrace, a dog would appear. As if by magic, one did. “Can we take a selfie with your dog?” the polite girls asked. “It’s not my dog,” said the dog walker, “but help yourself.” One canine selfie later and the girls were ready to roll, with half their treasure hunt well in hand. “Thank you so much for your help!” they cried. We love to be useful – and it makes a change from stray sheep… Let us know how you got on, girls!