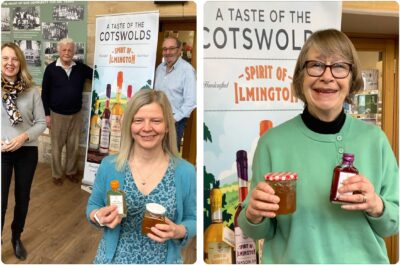 There were so many entries for the Great Ilmington Marmalade Challenge, we decided to give 2nd and 3rd prizes out too. “Hooray! Wow!” said Suzanne Harding, on hearing she’d earned 2nd place. Suzanne, who chose a miniature bottle of Spirit of Ilmington Apple Brandy for her prize, was not only in competition with half the village but also husband Ian. “We usually make marmalade together,” she said, “but this year we made one each and entered the challenge. It’s a Delia online recipe I’ve adapted for my Everhot. I put it in the bottom oven rather than simmer it on top.” Ian, who volunteers with Suzanne in the community shop, “gets through a lot of marmalade. He was pleased for me.” Wendy Larner, our judge, said Suzanne’s Seville orange marmalade had “great flavour and good peel. It was soft, but some people like soft!” Wendy gave 3rd place to Joyce Bridges, whose marmalade, she said, had a lovely flavour – “and it’s all about depth of flavour.” Joyce was delighted. “Good old Mary Berry!” she said. “It’s an Aga recipe. You put the oranges in whole, which was a bit of an experiment. It was fun to do and great fun for Ilmington Shop to organise.” Joyce chose a miniature Damson Gin by Spirit of Ilmington. “It was nice to make marmalade again after three years,” she said. “We’ve been eating it and have hardly any left! Please can I have my jar back?” In fact all entrants may now have their jars back. The judging was Covid-conscious and you’ll be safe to finish your scrummy marmalades at home. A final well done and thank you to all who took part, organised and judged the competition, including prize-givers @spiritofilmington