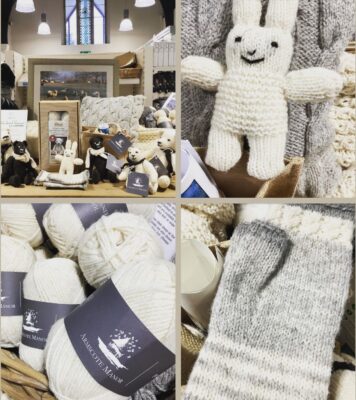 Deborah Williams sells her rare breed Portland wool to America and Australia, Canada and Scotland… and Ilmington Community Shop! We love to showcase local products, and learn about them along the way. The rare breed wool from Armscote Manor on our display table this week is a bit like a fine wine: it’s a highly-revered, conservation-grade product. It comes from an ancient British semi-primitive breed that was found in Portland, Dorset and mentioned in the Domesday Book. “Portlands produce an extremely beautiful wool,” says breeder Deborah Williams, who has lived at Armscote Manor for 29 years. “It‘s much softer than any rare breed fleece. It’s a natural, undyed, ethical yarn: biodegradable and water-resistant.” Deborah, a patron of Shipston Wool Fair, was set on her path 28 years ago when she decided to buy a few sheep to keep the grass down. She consulted neighbour Joe Henson (Adam’s dad), who said “if you’re going to keep sheep, why don’t you choose a rare breed?” When you buy Armscote Manor wool – or maybe one of the dog snoods, glorious throws or woolly cushion covers – you are supporting a breed that only produces a single lamb each year and was in real danger of dying out. You are supporting pure British wool (it’s processed in Cornwall by the Natural Fibre Company) and you are supporting British history. As Deborah says “we are championing slow fashion.” And if you want to work with this special wool yourself, we have two beginner kits that teach you how to knit a bunny or a pair of gloves from a single ball. “There are lots of grannies out there who might love to knit for their grandchildren,” says Deborah. “My work,” she adds, “is a labour of love.” We love being part of her story.