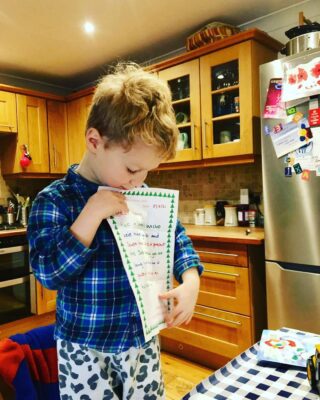 …a little boy is thrilled to open a letter from Father Christmas. Henry Hart, aged 3, is a new recruit of our Wednesday Parent and Baby group and, with a little help from his mum Laura, he wrote his first letter to Santa Claus. “When I asked him what he wanted for Christmas,” says Laura, “he just said ‘I’d like a present please.’ He’s only just getting the concept of gifts.” All the letters posted into Santa’s Post Box in Ilmington Community Café receive a handwritten reply from one of Santa’s elves. (We have a special connection to the big man himself.) Henry and Laura have been isolating this week, so we organised a magic sleigh delivery to save them coming out. “Henry loves getting post,” says Laura, “and especially a letter from Santa. Whenever he sees anything to do with Christmas he gets very excited.” We hope Henry has a lovely Christmas with his grandparents in Cheltenham, and that he gets that present he asked for. Santa’s Post Box is open until Friday this week, then the café closes from Saturday until 4th January. Personal letters from Santa’s elf can be collected from the shop at any time!