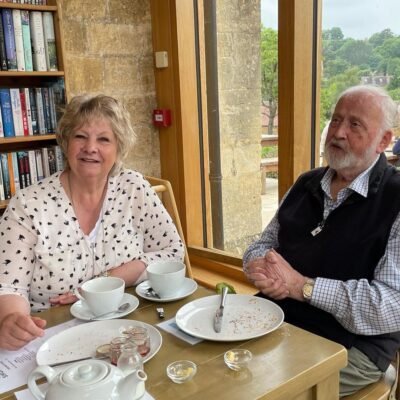 So many of our visitors have a deep connection with Ilmington. Perhaps none more so than Alan Finch, who was evacuated to the village 80 years ago when he was only six. “I was here for probably two years and back home in Coventry for 1943 when the bombing raids had slackened off,” he tells us. Alan has driven down from Hinckley, Leicestershire for the day with his second wife, Jan, and they are reminiscing over warm buttered tea cakes and a pot of tea for two. Alan’s connection with Ilmington dates back to 1941 when he was sent to stay with Mr and Mrs Fred Dumbarton of ‘3 The Council House, Washbrook.’ “Mr Dumbarton was the village Bobby and the gamekeeper up at Foxcote Manor,” says Alan. “I used to go with him setting the rabbit traps and pigeon shooting.” After the war and for the rest of his life, Alan has returned regularly to Ilmington, bringing his first wife Pamela, their children and grandchildren for picnics, walks, village hall parties and family reunions. Pamela is now buried in Ilmington churchyard and the extended family have one more reason to visit. “One of the first photos I saw of Al was with all the children having a big family picnic on Ilmington playing fields,” says Jan. “We still do that, we all love it here.”