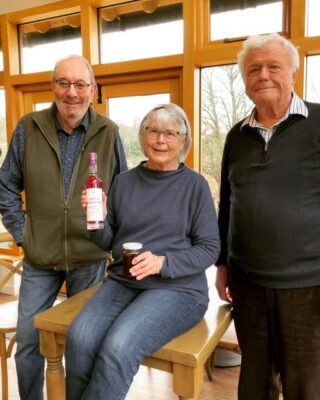 For the second year running, Ilmington resident Susan Brock has garnered first prize in the Great Ilmington Marmalade Challenge. “Well fancy that!” said Susan when informed during her volunteer shift in the community shop. “I’m not going to be modest, I think I make a very good marmalade! Brian and I like a chunky marmalade and this is it.” Susan’s bottle of Spirit of Ilmington Damson Gin was duly presented by Bill Buckley and Rupert Wyles, makers of Ilmington’s own designer spirits. “I love marmalade,” said Rupert. “I buy ordinary, bog-standard marmalade and put a spoonful of whisky in it.” He was delighted when Susan offered her winning jar to the Wyles household. Her recipe is Delia Smith’s Dark Chunky Marmalade, the secret of which is a long, slow boil. “It just tastes so good!” said professional food judge Wendy Larner, who conducted the double-blind judging process. “It’s got delicious caramelised orange notes and a good texture of orange pieces.” Second prize went to Carol Taylor for her Grapefruit, Lemon and Seville Orange Marmalade; third prize to Scott Reeve for his Manor Barns Marmalade. Many congratulations to everyone who entered, making this another splendid competition. As there was no double-dipping, your entries are ready to take home and enjoy